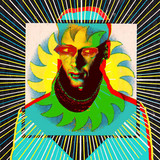 Visit @GoldAndThorns on Instagram to get details on and order 'POSTCARDS' on 12" Vinyl LP for $30. Order now... orders end 1/31/2021 !!! Gold & Thorns is a solo synth-driven-project of Jesse Anders. Anders came up through the indie rock scene in Philadelphia before joining Perfect Shapes, in Brooklyn NY for limited series of shows. He recently collaborated with Addy Edward on the single Waiting and co-produced the forthcoming No Kill album being released under the Substitute Scene label in 2021.   The modular synths & organic sounds of Gold & Thorns fit in well for followers of dream pop, psychedelic, and synthwave with vocals. It’s definitely for fans of M83, Cults, Porcelain Raft, Local Natives, Toro Y Moi and Cigarettes After Sex.   The Family Reviews - “Like you sunk a radio into the creepy cool parts of the ocean, and hit play on your favorite Indie pop station. Pop it on, lie on the floor, or in the grass if you’re lucky, and watch the sky to this. Clouds or stars – either will be great.”   CT Scramble - “Anders is an affecting vocalist, his vocal alternating between a gliding falsetto and wistful tenor over the pulsating instrumentation.”   Insta @GoldAndThorns