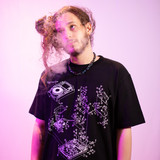 A love for SUBwoofers and elecTRONICS has brought us Subtronics. Growing up in Philadelphia, PA, Jesse Kardon aka Subtronics had a passion for his drum set and Radiohead. While in high school, he discovered dubstep and was inspired to jump into the world of production. Fusing his unique blend of cutting-edge sound design with hard-hitting bass, Subtronics seeks to push the envelope. On the live front, he has built a rabid following with his high energy sets and advanced mixing skills. Subtronics has graced festival stages such as Lollapalooza, Bonnaroo, Electric Forest, Bass Canyon, Electric Zoo, Lost Lands, Camp Bisco, and many more. He has headlined sold-out events at venues such as Red Rocks, Aragon Theatre, Hollywood Palladium, Echostage, MTelus, and the Tabernacle. He has releases on Ultra Music, Never Say Die, SubCarbon, Deadbeats, and more, in addition to his own label Cyclops Recordings. Subtronics has collaborations with Excision, Slander, Marshmello, Boogie T, Ganja White Night, and KAYZO, just to name a few. When not producing “angry robot noises,” you can find Subtronics spinning poi and playing kendama, taking dabs, and leading his devoted ever-growing band of followers in the ‘Cyclops Army.’ Presently, Subtronics is preparing to embark on his massive THE FRACTAL TOUR 2022 across the United States and Canada in the new year.