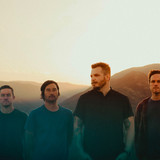 Since forming Thrice with guitarist Teppei Teranishi, bassist Eddie Breckenridge, and drummer Riley Breckenridge in 1998, Kensrue has never been one to back down from a mental fight. This mood is set by the opening synth-driven number “Color of the Sky,” which sounds well-suited to accompany the closing credits of the Stranger Things season finale. Think Flying Lotus giving way to Elbow and setting the listener down in a new dimension. A self-recorded effort, Horizons/East conveys a palpable sense of danger, determination, and possibility. Scott Evans (Sleep, Kowloon Walled City, Yautja, Town Portal) is on mixing duties, conjuring a landscape of gloom, glow, and glory. On “Buried in the Sun,” which had the working title of “D.C. Bass,” the band’s fondness for bands like Fugazi and Frodus comes to the fore. In it we learn that there’s a military-industrial complex, a vast apparatus of legal bullying, to take on (I saw the fire on the television/the DoD or the CIA), but the threat to our mental health in acknowledging our

own country’s participation in the terror trade is both immersive and interior. The psychic struggle will often come down to what we’re doing with our tools, how we hold what passes before our minds in dreams and on screens. There’s a lot to take in and a lot to be mad about, but Horizons/East invites us to slow tape and see.