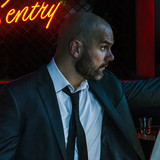 Seth SentryFrom the deepest, darkest depths of the COVID lockdown, Seth Sentry embarked on a weekly challenge. To get fans to submit beats, which he whipped up into short songs and dropped every Sunday on YouTube, like clockwork! Super Cool Tree House became a weekly staple for Seth Sentry fans in 2020. Waking up every Sunday, we were treated to a recap of the week and a certain take on the world that only Seth could give us. This might have included current events from around the world or just some weird shit that Seth was pondering at the time, and everything in between. When restrictions lifted in late 2020 and Seth was able to venture out to the studio, he collaborated with producer and friend Nic Martin to create Super Cool Tree House the album. A full collection of the songs from the YouTube series, with some tweaks and additions for keen ears. The full album release of Super Cool Tree House will feature unreleased track Castlevania. The only song to not feature in the YouTube series. Super Cool Tree House is happy, weird, funny, grim, irrelevant, and classic Seth Sentry. The kind of songs that we want to hear from Seth, when there are no rules. Just him, inside four walls, with a pad, a pen, and his trusty sidekick Titan The Cat. Due for release on June 18th 2021 on your fave DSP.