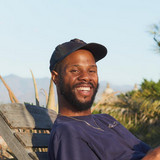 For the last decade, Anthony Lawson Jude Ifeanyichukwu Obiawunaotu has been everywhere: from star-making turns on the first A$AP Rocky mixtape to hosting shows on Viceland and Super Deluxe, to co-founding a DIY culture magazine to playing every worthwhile rap party in America and burning the stage down every single time. A singular and experimentally-minded rap artist adept at both traditional regional styles and indie pop, hardcore thrash, and melodic candy-painted bangers. He is punk in the platonic sense of the word: experimental and subversive, but also funny, whimsical, and virtuosic. Over the course of more than a half-dozen LPs, and countless other short-form gems and collaborations with everyone from Das Racist to Bun B, Fat Tony has reimagined and blurred the boundaries of hip-hop. There’s a spirit of creative restlessness and intelligence that runs through his deep discography. He is a national treasure, ask around and you'll realize that everyone in their right mind likes Fat Tony. He is the Whataburger of rappers: if you know you know. This fall, Fat Tony releases Exotica on Carpark Records. It heralds his most visionary work yet, an ode to the art of storytelling through music. A rich and compact iteration of rap short fiction that firmly establishes him as his own one-man genre, the preeminent post-modern griot shooting game.