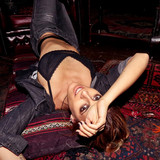 Angelika Dusk is a singer and songwriter who works on a regular basis with the award winning producer, arranger, songwriter, Rupert Christie(U2, Green Day, Coldplay, Lou Reed, Echo The Bunnymen, Rebecca Ferguson, “Mamma Mia”) and the multi-platinum composer, producer and songwriter Ryan Laubscher (Dido, Pixie Lott, Claudia Kane). Angelika studied classical music at Brown University in the USA and at the London Centre ofContemporary Music in the UK, where she developed her songwriting abilities. Her first single “Love on your own terms” from the EP “Telling Stories” and her hit single “Beautiful Love” (a co-operation with Greece’s most famous DJs Playmen) have both reached high airplay in the Greek radio stations. Angelika has performed at major Greek festivals, TV shows and in many live stages: opening for Boy George and Simple Minds at En Lefko Festival, opening for Kovacs (2015, 2016) before an audience of 4000 people etc. Her main influences are Florence and the Machine, Alanis Morissette, Garbage, Björk and the Editors. Angelika is now working on her second album and wants to advance to a darker, edgier and rockier sound. Her lyrics for this album are very symbolic, contemplating death, troubled relationships and the struggling balance between self-preservationand self-destruction.