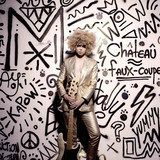 Bass player and vocalist Maya Vik gets low with her sexy funk and r&b sound, «… great, upbeat electro-funk that gets in your head and stays there» (Noisey), and «Summoning the 1980s Minneapolis funk of Prince and Janet Jackson» (The New York Times). Before going solo in 2011 and releasing two albums and an EP, she was the winner of the Norwegian Grammy for ‘Best Pop Group’ with her previous band. She was voted ‘Norway’s Most Beautiful Woman’ by fashion magazine Elle Mann. On her EP «Beyond The Basics» she collaborated with artists like Lindstrøm and Norwegian star producer William Idap (Nico & Vinz, Train, Kygo). She also co-wrote American r&b star Dawn Richards song «Not Above That», which was named the #3 best song of 2015 in Time Magazine. Playing live, Maya was once the bassist in Savoy fronted by A-ha’s Paul Waaktaar-Savoy. With her band, she has opened for artists from Dâm-Funk to Lenny Kravitz and has toured Japan, Russia, Holland, Germany and the US.