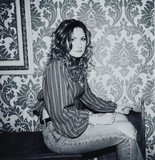 Haunting. Powerful. Uplifting. These are three words that describe Elise Hayes’ music. Combining infectious pop and r&b melodies with heartfelt and meaningful subject matter, Elise’s songs live in a unique space in the palate of today’s popular music.   No stranger to the stage, Elise Hayes has performed since the age of 12. She attended the esteemed Berklee College of Music as a vocal major, and soon after graduating, relocated to Nashville to pursue a career as an artist and songwriter. “My journey in the music industry hasn’t been a straight line to success,” she says, “I have had to bend and mold and create my own opportunities.” She certainly has done just that. Elise Hayes has written songs that have been featured on numerous TV shows, such as ABC’s “Grey’s Anatomy”, Freeform’s “The Bold Type”, MTV’s “Siesta Key,” and many more. The talented singer/songwriter has further written songs for other prominent artists (Lucie Silvas “E.G.O”, Jill Andrews “Rust or Gold”), and most recently, toured the country as a background singer and keyboard player for country star, Carly Pearce, opening national tours for Blake Shelton, Luke Bryan, and Thomas Rhett.   Her highly anticipated single ‘Giving Up’ is an empowering anthem featuring glistening vocals, electro pop soundscapes and infectious melodies. She reveals, “This song acts as a reminder to everyone who has ever been broken up with, that sometimes someone leaving you is the greatest gift, because you get yourself back.”