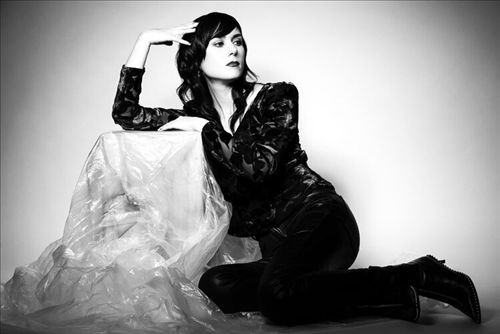 As Noveller, guitarist Sarah Lipstate employs loops and an intricate web of effects to create textural, expansive instrumental soundscapes. Lipstate's background in filmmaking informed the cinematic elements of her ambient guitar compositions. Noveller's sound progressed from slow-moving drones to filmic science fiction-themed pieces, eventually growing from solo guitar arrangements to incorporate synthesizers and rhythmic elements on 2017's A Pink Sunset for No One. While attending college in Austin, Texas, between 2003 and 2006, Lipstate played guitar in an experimental duo called One Umbrella with synth/electronics partner Carlos Villarreal. Noveller was devised as a guitar-based solo moniker in 2005 when Lipstate contributed songs to a few different noise compilations, as well as self-releasing two 3" CD-R EPs, Vasovagal and Nerves and Endings. Her heavily processed guitar loops resulted in an icy wash of distant sounds, spare and unsettling by turns. In 2007, a move to the East Coast brought Noveller into the realm of live performance, starting with a spot at Washington, D.C. experimental festival Sonic Circuits. Various shows in the New York area followed, which led to a meeting with sound artist Carlos Giffoni. Giffoni issued the first two Noveller full-lengths, Paint on the Shadows and Red Rainbows, on his No Fun Productions label. Both records saw release in 2009. The same year, Canadian label Divorce released Colourful Disturbances, a split LP between Noveller and Aidan Baker. In 2010, Lipstate started her own imprint, Saffron Recordings, releasing her third solo full-length, Desert Fires, as well as a split LP with unFact. Her fourth proper full-length, Glacial Glow, was released jointly through Saffron and Weird Forest in May 2011. In the interim between albums, Lipstate kept very busy with one-off festival performances as well as regular shows in Manhattan and Brooklyn and tours of Europe and the U.S. for each new record. She also collaborated frequently, performing at times as a member of Cold Cave and Parts & Labor. In addition, Lipstate acted as a player in Rhys Chatham's Guitar Army and Glenn Branca's 100-guitar ensemble, among other duo improvisation dates with fixtures of N.Y.C.'s experimental scene. Following a limited 2012 tour-only CD-R titled Artifact, the proper full-length No Dreams saw release in 2013 on the Important Records label. Reveries, a collaboration with Thisquietarmy, appeared on French label Shelter Press in June 2014. Noveller then signed to Fire Records, which issued Fantastic Planet, an album of decidedly more cinematic soundscapes, in early 2015. Following the LP's critical success, the label subsequently reissued No Dreams and Glacial Glow. Around this time, Lipstate gained a new fan in Iggy Pop, who not just took Noveller on tour as an opening act but eventually began to collaborate with her on writing new material. Noveller's eighth set, A Pink Sunset for No One was released on Fire Records in 2017, finding Lipstate's cinematic solo guitar compositions expanding to include percussion and other more structural elements. Lipstate continued her affiliation with Iggy Pop, collaborating with him and trumpet player Leron Thomas on his subdued and reflective 2019 album Free. At this point, Lipstate was stationed in Los Angeles and had officially joined on as a guitarist in Pop's touring band, but she also continued work on Noveller. Her next solo album, Arrow, was released in June 2020, preceded by several singles that continued Lipstate's expansion from her early sheets of sound into more compositionally complex territory. ~ Fred Thomas, Rovi