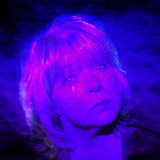 Tokka is the pop group founded by singer Ingrid Tokka. In 2018 the debut album "Never Alone" was released. The featured songs are often philosophical and are about different phases in life, relationships (I'll always be there for you / Scattering Lights), important decisions (Breaking the Chains / Amsterdam / What life could be) or strong emotions and love (Bird on a Wire / Cry Love)…. Some are about seemingly inexplicable things, such as dreams (Before I wake up), death, the origin of life, the universe, and our inner, spiritual and mysterious aspects (Moonstruck), Also going back in time with the flashback song "Throwback Thursday". Of course there are the compensating positive notes (Make up Song for our lost Souls), while the title track "Never be Alone" brings it all together again and closes it smoothly. The music, lyrics, the arrangements and instrumentation deliberately have been chosen to revive the pop and post-punk atmosphere of the 80s, albeit in a contemporary style. We clearly hear the influences of popular bands from that period, such as @Fleetwood Mac, @U2, @Simple Minds, @Roxette … *** Anno 2020 - Releasing the new singles "Bigger than Life" and "Running on Fumes" The music style is pop and rock, with noticeable influences from the 70’s and 80’s.