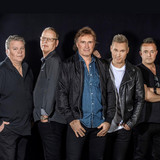 With a lifespan extending over half a century, the Streaplers are a long-running Swedish dansband anchored by twin brothers Göran and Håkan Liljeblad, the only remaining members of the original lineup. Founded in 1959 in Kungälv, the band was originally also comprised of Gert Lengstrand, Bjarne Lundquist, and Lars Larsson. Beginning with their 1963 breakthrough hit, "Säkkinjärven Polka," the Streaplers enjoyed a string of hit singles during the mid-'60s, among them "Diggety Doggety," "Mule Skinner Blues," and "Rockin' Robin." The band's string of hits was interrupted by the departure of vocalist Gert Lengstrand in 1966. He was replaced in 1969 by Robert Löfvendahl, and the band proceeded to score a number one hit that year with "Tusen öars Land." Ove Pilebo then took over vocals from Löfvendahl in 1970, and the band's popularity continued for years onward, including commercially successful albums such as Det Finns en Sång (1971), Lady Banana (1974), Valentino (1976), Speed (1978), and Om Jag Säger Att Älskar... (1979). In fact, the Streaplers' popularity carried them well into the next century, as they continued to release commercially successful albums such as Gör Det Igen (2004), Vad Som Än Händer (2005), Bästa! (2007), and Rakt Av (2008), the latter a Top Five hit on the Swedish albums chart. ~ Jason Birchmeier, Rovi