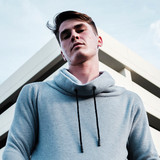 Etoc is a rap phenom who has music running through his veins and is turning heads in the Hip-Hop circuit. His clever lyricism, magnetic delivery, efficient wordplay and irresistible personality have already earned him acclaim among Hip-Hop aficionados in his hometown and beyond. Etoc has a unique ability to articulate emotions with an unparalleled wordplay. All of his lyrics are relatable, expressing his experiences and emotions. He perfectly proves that on his standout singles “Saddie”, “Bad Habits”, “The Run”, and “Crashin'”, released via his indie label Moon Boots Records. The songs reflect Etoc’s experiences with love and the struggles of relationships and in life. Within 2 years after officially starting his music career and uploading songs to DSP retailers, the aspiring wordsmith was able to generate over 1.500.000 streams and over 35.000 followers on Spotify. Furthermore, his recent singles earned him radio airplay on major FM radio stations in Europe. Moreover, Etoc has been featured in Hip Hop Weekly, Yo! Raps, Hip Hop Stardom, TRUE Magazine and more prestigious publications. Authenticity is the key to his growing success. Etoc doesn’t create cookie cutter radio songs. Instead, he concentrates on producing passionate songs from his heart and soul. He is here to break through the monotony and staleness of the current Hip-Hop landscape. His grind is relentless and his vision is crystal clear. Etoc is on a mission to take Hip-Hop to new levels!