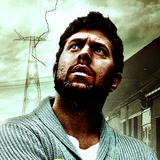 Norwegian rapper with distinct lyrics who in 2020 claimed to have discovered the secret to living a truly satisfying life. Growing up, he got to witness how bullying can affect people, and mad at himself for not doing more to defend the bullied when he was younger, he has been an advocate for tolerance and acceptance during his music career. This lead to the songs "Odins Kall" and "The One Who Heals", both which he made with the extremely talented Oda Gondrosen (produced by Lazz from the band Oceans of Time. Relaunching his career in 2020, he has upgraded his style and his content and is attracting a larger fan group than ever before. Although he admires and respects Eminem as one of the greatest rappers in history, he hates being compared to him, saying "I sound nothing like him. He has enunciation, timing, accuracy, a vocabulary and presence that I could never hope to achieve. I make music because I have something to say. Those who feel me will listen, the rest will not. I will never be technically or lyrically as good as the OG's, but I hope my message comes across in my serious songs, and I hope to entertain and make you laugh in my more funny and sarcastic songs." His first single in 2020, "Back Again" received praise from many in the industry and truly launched round 2 of Andy's career.