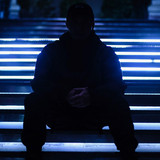 After countless late-nights working on his craft over the past 10 years, Rob Shih is now a fully-fledged production machine. He has become a versatile, ethereal producer under the moniker, Kiba. Delving deep into his own creative mind, his explorative synthesis and production styles took over and allowed him to create the wonderfully intricate project we hear today. Self-described as emotional, cinematic and futuristic, his brand of bass music takes influences from a multitude of sub-genres such as Trance, Drum & Bass, Mid-tempo, Dubstep, Trap, Wave, and Techno. Kiba has releases on labels such as Jauz's Bite This Now, Reid Speed's Play Me Records, and Simplify Recordings. He also has a number of self-releases, including his largest project: a 5-track EP entitled "Seraph" which was released in March of 2020. Kiba has utilized the past year to further grow his production abilities in the studio, and has expanded his focus to develop the visual aspect of the Kiba project as well. With a more holistic approach in mind for creating full audiovisual content going forward, he is laser-focused on creating more engaging and exciting experiences for listeners that will plug them into a whole different universe.