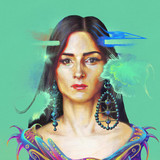 Pola Rise is a young composer, vocalist and lyricist. Being compared to artists like Bjork, Lykke Li or Banks. Her first album released in 2018 was titled “Anywhere But Here” on which she blurred boundaries between electropop and alternative music.

The album was a result of multiple travels. She has visited New York, London, Copenhagen, Berlin, Dublin, Torino, Seoul, Reykjavik and Oslo. Pola worked with a few producers from different countries: ROBOT KOCH, NECTOR collective, LOXE, EMIJI, MANOID, and JANEK PĘCZAK, and that resulted in unique sound of her songs. POLA RISE was nominated to FRYDERYK AWARD (the biggest annual award in Polish music) as the BEST NEW ARTIST of 2019. POLA RISE was third on SANKI 2018 - Polish version of BBC SOUND OF, for the best newcomer Artist of the year. On tour promoting the release Pola Rise and her band played over 150 shows in Poland and abroad (Open’er Festival, Spring Break, Soundrive Festival plus festivals and clubs in Lithuania, Germany, Iceland, Austria, the UK, South Korea, and Italy). They also were lucky to support Selah Sue, GusGus and Karin Park.