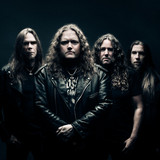 Warriors!!! Hear the sound of the battle cry! Currently working on their newest album (14th) slated to appear on Napalm Records for a 2021 release, legendary Swedish trailblazers UNLEASHED have forged a modern Death Metal weapon from the blood and spirit of their Viking ancestors. For more than 31 years the warriors of UNLEASHED have been the ultimate embodiment of Death Metal and are seen as founding fathers of the Viking-Death-Metal movement as well. Without ever having compromised in the slightest they managed to unite the spirit of the Viking tradition with the grandeur of purest Death Metal to this day. The band was quoted as saying: We set out to first and foremost be a live act. The bands musical vision was to keep to the roots and develop within our own style of music instead of changing with the winds. To this day, that is still our vision. Lyrically, Unleashed introduced “The Viking Traditions and Values” into death metal music back in 1989. And strove to be the Chief Vikings of Swedish Death Metal. This meant that they aimed to lead and define the future of Viking Death Metal. They most certainly did just that, defending and developing the content of these traditions and values well over 31 years and plan to continue into the everlasting future.

Soon they will be back at full power to prove once again who is the righteous leader of this undying scene. For full discography visit: