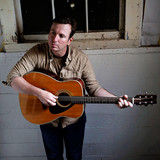 Jason Tyler Burton writes engaging songs that will make you lean in a little and really listen. He is careful with the places and people he writes about, telling complicated truths with humor and grace. Living quietly in Pinedale Wyoming, he’s played festivals such as Red Ants Pants, been featured in The Bluegrass Situation, and shared the stage with Ben Sollee, Kim Richey, and Courtney Marie Andrews. His folk songwriting has been called “working class country roots from a gifted songwriter,” and WyoFile called him “a masterful musical storyteller who manages to balance vivid specificity with relatability in his songwriting.”