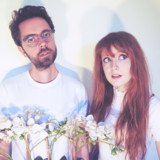 Post Coal Prom Queen (FKA L-Space) are Lily Higham and Gordon Johnstone. Lily and Gordon have developed a unique sound for PCPQ by blending organic textures, retrofuturistic synths, and mechanical beats with ambitious pop sensibilities - fused together with Lily's distinct vocals. Their songs have been heard on BBC Radio 1, 6Music, and BBC Radio Scotland, charted on Amazing Radio, been featured on the major 'Hot New Bands' Spotify playlist, and have garnered international acclaim. They take influences from the likes of Gorillaz, Portishead and Boards of Canada and combine them with their own distinct style to create new and exciting pop soundscapes. In 2021 the duo released their debut EP to critical acclaim and were comissioned by Hidden Door (Scotland) and Flourish (Canada) to record exclusive live sets. The band's music has also been used in the upcoming film National Libraries of Scotland film 'Living Proof' and in the popular Channel 4 show Made in Chelsea. In 2022 the band plans to reschedule their Covid-cancelled live shows in London, Paris, Tokyo, Glasgow and Edinburgh and to release their debut album. “they've never sounded better” – The Skinny “They crystallize a vivid miniature world as delicate as a snowglobe” - SNACK “It practically scorches into being on the back of dark industrial synths like a bomber raid, pulls back the curtain on some thrumming melodicism, and entrusts Lily to siren-song you towards a distant light” - Backseat Mafia