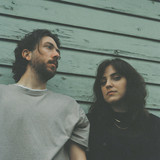 // Currently finishing off our second album, ready for release this year! //   It's hard enough to have one successful career. Having the strength to call time on it and start from scratch seems like self-sabotage. In Kate McGill and Dan Broadley's case however, it looks like it's going to pay off. Their early years – while exciting and substantial – now look like practice for the main event. The moment it was all building up to? Meeting each other and forming Meadowlark, a matter of weeks later they were asked to support Bastille.   There was interest in the band from the get go; their track Eyes Wide was added to BBC Radio 1's Introducing playlist, XFM's evening playlist and featured on Hype Machine's Top 20. They've also performed a session on Dermot O'Leary's BBC Radio 2 show, played Glastonbury's Introducing stage, at the Great Escape, MAMA festival in Paris, Dot to Dot, and appeared on episodes of Vampire Diaries and Made in Chelsea.   Ahead of the release of their debut album Postcards in June 2017, the duo reworked some of their early singles on Nocturnes. Recorded late at night with a live string quartet, the EP includes a heart-stopping cover of the Sugababes track, ‘ About You Now’. They closed out 2017 with the Sunlight EP, which features an amazing cover of Francis and the Lights stand out single May I Have This Dance, which was also remixed by EMBRZ.