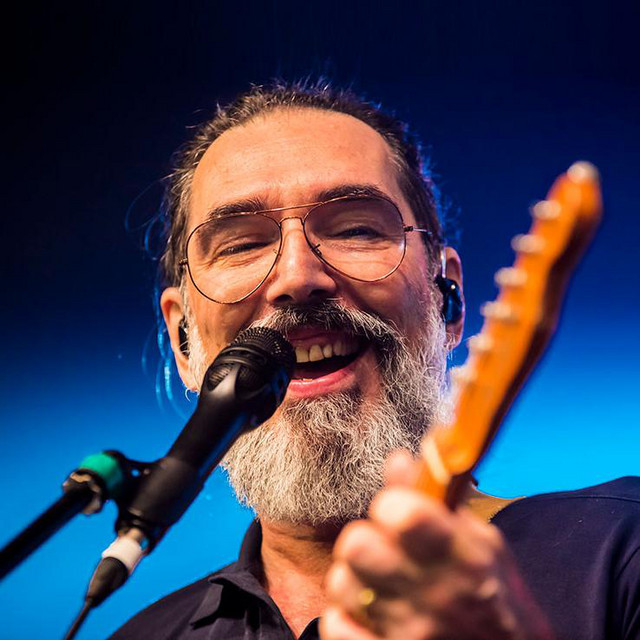 One of the artists who helped the inception of the style known as Brazilian rock emerged in the '80s. Lobão also has a noted discography with expressive hits recorded by Marina and Nelson Gonçalves, among others, and promoted important discussions on the obscure subject of artistic rights in Brazil. After his stint in the important group Vímana, Lobão began to work as a freelance drummer, appearing on Fagner's LP Ave Noturna. He also worked in that phase for Marina, Luiz Melodia, Walter Franco, Gang 90 & As Absurdettes, Lulu Santos, Ritchie, and Blitz. In 1981, he recorded his first solo LP, the independent Cena de Cinema. Several of its songs became classics of the nascent Brazilian rock, such as "Cena de Cinema," "O Homem-Baile," and "Amor de Retrovisor." One of the founders of Blitz (together with Ricardo Barreto and Evandro Mesquita), the group would be a milestone in the consolidation of the Brazilian rock style. In the huge success of the early times, Blitz recorded the first album (As Aventuras da Blitz) with Lobão, but he abandoned the group and its success, annoyed with its commercialism. It was then when he finally convinced RCA to release his Cena de Cinema, which was unpublished until that time. Organizing the band Lobão e Seus Ronaldos, he recorded the new wave/techno pop album Ronaldo Foi Pra Guerra (1984) with "Me Chama." But the other members, among diatribes involving a junkie girlfriend of one of them, banned Lobão from his own band in that same year. In the next year, he worked as an actor in the film Areias Escaldantes (Francisco de Paula). In March 1986, after an imprisonment for marijuana and cocaine possession, he released the album O Rock Errou, where the death of Júlio Barroso (Gang 90) inspired a depressed release. Sambista Elza Soares appeared on the album, which pioneered in the rock/samba crossover and the album sold 100,000 copies. In 1987, Lobão recorded his "A Deusa do Amor" (with Bernardo Vilhena) with the old radio days phenomenon Nelson Gonçalves (a rehabilitated addict) and was arrested twice due to drug possession, spending a "season" at Ponto Zero while he recorded Vida Bandida, which sold 300,000 copies. Cuidado! (1988) brought a more explicit approximation with samba via Ivo Meirelles. In November, condemned to imprisonment, he ran from the country until the sentence became void in 1989. In that period, he recorded Sob o Sol de Parador. Vivo, his seventh album, with the participation of the drum section of the Mangueira samba school, was recorded live during the São Paulo and Rio editions of the II Hollywood Rock, where a poll revealed that Lobão had been the best performance in the audience's opinion. In 1995, he released Nostalgia da Modernidade and later became again the polemic epicenter of a discussion involving recording labels and artists, as he distributed his album via newsstands. In 1998, he released Noite, which used techno pop as criticism, and in the year 2000 he promoted more polemics defending the community radios and denouncing the communication system in Brazil as being a politicians' feud. ~ Alvaro Neder, Rovi