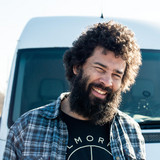 C.J. Boyd has literally spent the last ten years of his life on tour, which he lovingly refers to as the ‘InfiniTour.’ As the ten-year anniversary of the InfiniTour approached, Boyd decided to mark the occasion with the release of a commemorative album. But no ordinary album would suffice: the project would have to match the expansive scope of the massive endeavor being celebrated. From this idea, Kin Ships was born. Kin Ships is a sprawling, four-disc collection that documents the vast assortment of people and places Boyd has touched, and been touched by, over the last ten years. “First, each song is recorded in a different state, and in that state alone,” Boyd explains. “Secondly, each song is a cover of a person or band from that state with whom I have played shows. That means I recorded 51 songs, each one in a different state (plus DC). Every song is a cover, and I only covered songs of people with whom I have actually shared a stage.” Despite his adherence to these rules, Boyd’s experimental approach to making music remains intact. Throughout the album Boyd is aided by an enormous cast of collaborators, Kin Ships features 80 guest vocalists, and 175 guest musicians. Boyd’s multilayered bass and vocals are accompanied by all manner of instruments, including theremin, marimba, kalimba, church organ, and saw just to name a few.