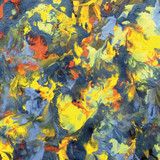 Long Island formed in September 2019 in South East London after two friends reconnected and challenged themselves to do something different. Soon after an advert was placed for a drummer and within 2 weeks Aaron, Lincoln and Tony were playing original tunes in the dining room of Aaron’s house. Made up of Drums, Baritone Guitar and Ukelele, their sound evolved into a mixture of folk sensibilities, Clash-esque raw energy and laid back funk grooves. Within a month and a half the first available studio was booked and the trio were recording an EP in a soon to be demolished space that had hosted the likes of The Damned and the Boomtown Rats several decades prior. Long Island's EP 'Love Is a Different Pain' is available now.