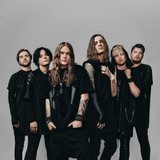 Blind Channel - The pioneers of Violent Pop music & Finnish Grammy nominees 2019.   For the past few years this young & hungry wolfpack has proved how much can be achieved by hard work and persistence. This fresh and reckless boy band has brilliant skills to compress the pure energy and attitude of modern rock music into an outcome that is compelling as f***.  Blind Channel has already reclaimed the expectations as one of the most promising music export artists from Finland.   Their career started out successfully. Blind Channel won two big band contests and impressed audiences around Europe with their extremely energetic live show. A few repercussions of that were a recording contract with Ranka Kustannus. After successful tours in Europe with bands like Hollywood Undead (USA), Simple Plan (CAN), Amaranthe (SWE), All That Remains (USA) and Enter Shikari (UK) their debut album 'Revolutions' and the sophomore 'Blood Brothers' gained praised reviews from both the audiences and the media.  Blind Channel's 3rd studio album 'Violent Pop' was released on March 2020 just right before the whole world shut down. The frustration lead Blind Channel to the winning recipe: After the landslide win of UMK the band represented Finland in Eurovision 2021 ending up to 6th place on the grand final. Their single ’Dark Side’ ended up on Global Spotify top #62 and reached top 50 in over 25 countries.   MANAGEMENT Backbone Management antti (at) backbonemanagement (dot) fi