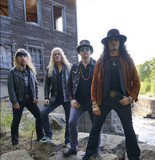 Sweden's the Quill spent years quietly making a name for themselves in stoner and heavy rock circles, following an inauspicious start in the coastal town of Mönsterås in 1990. Originally founded by singer Magnus Ekwall, guitarist Christian Carlsson, organist Anders Haglund, bassist Peter Holm (who was replaced in 1993 by Roger Nilsson), and drummer Jolle Atlagic, the group released its self-titled debut album in March 1995 to very positive reviews; then they embarked on a tour with Abstrakt Algebra, capped by numerous Swedish festival performances. Organist Haglund was dispensed with at tour's end, and the Quill would henceforth carry on as a quartet, but not without incident, as problems with their label delayed the release of the 1999 sophomore album, Silver Haze, for almost two years. Luckily for the Quill, sporadic touring and another strong set of tunes helped maintain forward momentum, and a new deal with SPV paved the way for a consistent flow of excellent albums -- ever in the stoner rock mold -- in 2002's Voodoo Caravan, 2003's Hooray! It's a Deathtrip (which was supported with a legendary European tour alongside Monster Magnet and Gluecifer), and 2006's In Triumph. Internal strife had begun rearing its ugly head once again, however, and after losing bass player Nilsson in 2005 (a man with a wandering eye, he'd already participated in one-off sessions for Spiritual Beggars and Firebird, and was replaced by Robert Triches), the Quill parted ways with vocalist Ekwall in 2007, then had to start sharing drummer Atlagic with Hanoi Rocks, post 2008. Nevertheless, after taking some time off to reflect and recharge, Carlsson, Atlagic, and Triches recruited a new frontman in former Ground Mower and Sol 78 singer Magnus Arnar, and recorded the Quill's sixth studio album, Full Circle, in 2011. The critically acclaimed Tiger Blood dropped in 2013, with 2017's Born from Fire (their eighth full-length outing) marking the return of vocalist Magnus Ekwall. ~ Eduardo Rivadavia, Rovi