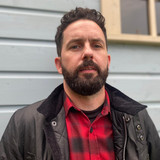 www.pecomusic.com Peco is an Irish artist who's music is a blend of Folk, Americana and Indie-Rock. His songs combine strong melodies with insightful and imaginative lyrics. Peco has something to say but likes to do so with a hook or two! He released his debut EP 'And So I Arrived At The Start' in 2017 and his debut solo album, 'The Middle Ages' was released in 2019. His latest single ‘The Hard & The Wild’ is available from Oct 1st. Hailing from Kildare in Ireland, Peco draws inspiration from the culture, land and people around him, both dark and light. He has a long and varied history in the music world, playing in bands since a young age, crossing genres of Rock, Americana and Folk. Before performing under the Peco moniker, he was the singer-songwriter behind folk-rock act Valentine Black. Previous to that he was the frontman for prog-rock outfit Bright Light Fiasco, and folk-pop band Pedestrienne. Peco's songs have received airplay on regional and national stations in Ireland and abroad. His song, 'Retrospect' debuted on US TV last year. 'Safe Haven' was a Finalist in both The USA Songwriting Competition and The International Acoustic Music Awards. 'Self Help - A Beginner's Guide' was recently placed as a semi-finalist in the UK Songwriting Competition and a finalist in the International Acoustic Music Awards. He has also twice reached the semi-finals of the UK Songwriting Contest with his songs 'Retrospect' and 'Love Oceans'. ​