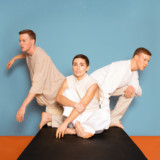 Multi-platinum D.C. trio SHAED spent much of 2018 and 2019 supporting their global breakout single “Trampoline.” With nearly 2 billion streams to-date, feverish radio play - #1 on the Alternative and Rock Airplay charts and national television performances. In free moments between international festival dates and headline tours, SHAED – Chelsea Lee, her husband Spencer Ernst, and his twin brother Max Ernst – found themselves co-writing on the road with renowned songwriters and producers, creating an album-worth of songs under the pressure of following-up their first commercial hit. Soon the band discovered that what would have been their debut album no longer felt personal. “We had a chance to take a serious look at all of the songs in front of us, and one thing was clear - they no longer told our truth. They didn’t feel genuine because we had lost sight of why we started making music together - to create music that was honest and true to our own experience” explains the band. SHAED scrapped everything they had written and started from scratch. Throughout the remainder of 2020, the band recorded a new set of songs in their home studio, digging deep into the anxiety, depression, and fear that the pandemic brought on. SHAED’s debut album High Dive features collaborations with Two Feet, ZAYN and Lewis Del Mar.