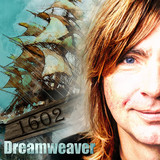 The Dreamweaver (Markus Pitzer) was born in 1970 in Schladming, Austria. He began to compose music at the age of 16. He is best known for his success on mp3.com in the early 2000’s and the songs that he composed for the PC-Game Anno 1602 in the 90s. He later composed filmmusic for the independent western film "Und sie kehrten niemals wieder". At this time Dreamweaver has released 5 Albums and 16 digital music packs for download.

The compositions range from electronic instrumental music in the genres like EDM, Synthpop, Dreamdance, Chillout, New Age, Ambient, Meditation, to Soundtracks for Video, PC Games and Film scores. Dreamweaver invite you to discover a world of deceleration, relaxing mood and fantasy. He would be glad if you participate in his musical world of electronic instrumental music. Dreamweaver started in March 2019 to release songs from his albums to streaming platforms and spotify. Over the next weeks and months, many more of his 200 songs that he has composed in the past will follow. I hope that you will join me on my journey of electronic music! Dreamweaver appreciate every support in his music! Follow Dreamweaver’s Artist Page and add his songs to your playlists! Artist Website: www.dreamweaver.at