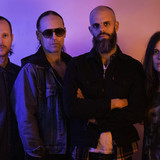 Baroness formed in Savannah, Georgia in 2003, a home-base where they formed their creative ideology, booked their own shows, hand-printed their merchandise, and began a relentless touring regimen, with a DIY/punk-ethic that they had shared since adolescence. In 2007, they released their critically-acclaimed debut, the sludgy, guitar-banging The Red Album, which Revolver magazine awarded "Album of the Year". They followed it up two years later with the proggier, heavier Blue Record, extreme-metal magazine Decibel’s "Album of the Year." On 2012’s double-album Yellow & Green the band began to really open up, exploring a much broader variety of songs with more melodic vocals and alt-rock arrangements, earning a Top 30 chart debut in the U.S. and Spin magazine’s "Metal Album of the Year." In 2015 the band formed their own label, Abraxan Hymns, and released Purple, which Rolling Stone proclaimed “…a ferociously cathartic and brilliantly crafted blast of progressive metal.” In June 2019, the Grammy-nominated band returned with their most ambitious work to date, Gold & Grey. The new album swirls triumphantly past genre barriers, their anthemic alt-metal hooks ricocheting between the circuitous twists of prog and jazz, the moody swirls of space-rock and noise, and the hypnotic pulses of trip-hop and 20th Century minimalism, with lead vocalist Baizley noting, "This is the most clear representation of the artistic vision I have for the band that we’ve ever done.”