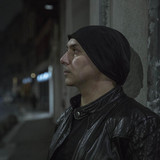 I was just a kid when I decided that music would be my way. It was a long and challenging journey during which I worked with many artists, musicians and producers from whom I learned a lot, refining the tools of the trade. Only after years the acquisition of awareness that, in addition to putting myself at the service of others, I could create something of my own that would bring me back to the purest love of music. That's why "THE PRICE" was born. I wanted to go back to the main reason why I started making music. THE PRICE, in fact, represents "the price" paid to achieve what I have done. Things are never free, if you want something you have to be willing to pay the price. In my career I had to fight against windmills and faced some daunting moments, but I 've never back down, because where many people would give up, I went ahead. The obstacles were not only practical but also moral, and often connected to problematic interpersonal relationships, a source of frustration and deep emotional fractures. For this reason, the choice to link "A SECOND CHANCE TO RISE", THE PRICE's first album, to the concept of human pathological relationships, is an integral part of the project, as is the series of noir-cut video clips created to accompany the songs, in order to make it a true cinematographic transposition. In my life path, THE PRICE is an important milestone, but at the same time it's a starting point for a new beginning. "A SECOND CHANCE TO RISE”. Marco Barusso - The Price.