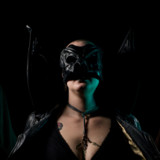 The Great Discord is a Swedish progressive death pop band – a genre coined by the band to better represent their sound that is rooted in influences ranging from technical and progressive metal to contemporary pop music.   Their critically acclaimed debut album Duende was released in 2015 by the esteemed label Metal Blade Records, and the success gave them the opportunity to tour with bands like Ghost, Kvelertak and Katatonia. In the fall of 2017, The Great Discord’s long awaited sophomore album The Rabbit Hole was released on The Sign Records, and instantly received praise from press and fans alike. The Great Discord are: Fia Kempe - Vocals, Aksel Holmgren - Drums, Victor Edström - Guitars , Rasmus Carlsson - Bass The band is now gearing up for the release of their third album "DEAM MORTE", due early 2022 on Pazuzu Recordings. Get ready for the new era!