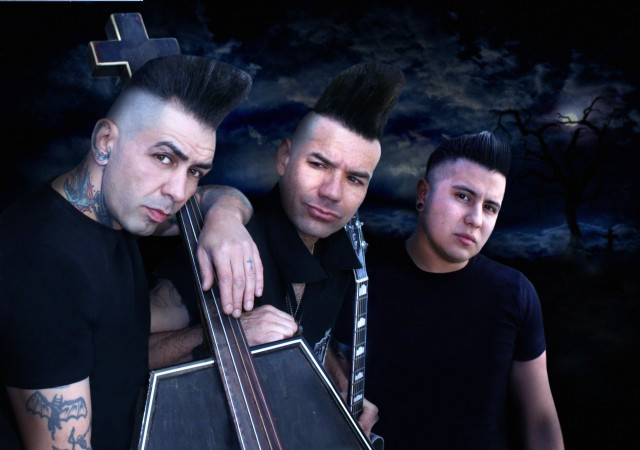 One of the wilder bands operating in the psychobilly genre, Nekromantix employ a lethal blend of punk rock and rockabilly with a horror-themed twist. Emerging in the late 1980s, the Danish-American rockers led by founder, frontman, and sole constant member Kim Nekroman delighted European audiences in the '90s with their monster-fueled antics, before bringing their unique sound and style overseas in the 2000s. Since debuting in 1989 with the punishing Hellbound, the band have found success both at home and abroad via sinister releases like Return of the Loving Dead (2002), What Happens in Hell, Stays in Hell! (2011), and Symphony of Wolf Tones & Ghost Notes (2016). Kim Nekroman (bass, vocals) quit an eight-year career as a submarine operator in the Royal Danish Navy to found Nekromantix in 1989; Peter Sandorff (guitar, vocals) and Kristian Sandorff (drums) joined him in the trio soon after. After performing live on two occasions, the band immediately gained an enthusiastic following, not only in Denmark but also in Germany, where they made their first festival showing in Hamburg. That performance led to a record deal for the first Nekromantix album, Hellbound. With a sound once described as "Elvis meets the Wolfman," the band toured extensively throughout Europe in 1991, releasing Curse of the Coffin, their classic second full-length album, that same year. The Brought Back to Life EP appeared in 1994, and two years later Nekromantix offered up Demons Are a Girl's Best Friend. A tour in Japan followed, as well as a 2000 live set for Kick Music. Nekromantix signed with Hellcat Records, a vanity label of the respected punk indie Epitaph, for 2002's Return of the Loving Dead, their U.S. debut. The guys stayed with the label through 2004's Dead Girls Don't Cry, which appeared after Nekroman's relocation from Copenhagen to Los Angeles (the Sandorff brothers stayed put in Denmark). Brought Back to Life Again followed a year later, which was actually a reissue of the by then out-of-print 1994 release. The Nekromantix lineup did see some turnover over time, and backing up Nekroman's signature coffin-shaped bass and vocals in 2005 were guitarist Trouble Tony and drummer Wasted James. By the April 2007 release of Life Is a Grave & I Dig It!, however, he was instead joined by guitarist Tröy Deströy and drummer Andy DeMize (Andrew Martinez). Deströy left the group shortly after the album's release to pursue a solo career, and was replaced by guitarist Pete Belair from the Aussie band Firebird. On January 11, 2009, DeMize was killed in an automobile accident, and the band brought in their first female member, Lux, to take over behind the kit. Arriving in 2011, What Happens in Hell, Stays in Hell!, the group's eighth studio long-player, was the first Nekromantix outing for Lux and guitarist Franc, the latter of whom had replaced Belair in 2007. In 2014, Lux left the fold and was replaced by Adam Guerrero, formerly of Rezurex, who made his debut on the band's 2016 offering, Symphony of Wolf Tones & Ghost Notes. In 2019, Nekromantix released the concert film and accompanying album 3 Decades of Darkle, which was recorded live at the Observatory Theater in Santa Ana, California. ~ Mario Mesquita Borges, Rovi