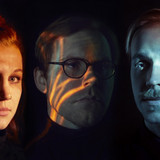 "We find ourselves in an artistic renaissance. We have sharpened our expression." Einar Stray Orchestra, the colourful, exuberant indie band from Sandvika in Norway released its third studio album "Dear Bigotry" in 2017. The album was created on an island in the Northwest-coast of Norway. While winter storms were roaring outside the studio windows the five band members and producers Marius Hagen (frontman of Team Me) as well as Rumble In Rhodos guitarist Øyvind Røsrud recorded the ten songs on their third album. In this seclusion they let their soundscape be inspired by Arabic folk music, Flying Lotus, Stravinskij, Japanese metal, Mars Volta, Dirty Projectors and Lana Del Rey. And yet the band's sound arises from an unusual setting in indie rock: The predominant absence of guitars is met by Stray's piano as well as cello and violin and plays with expectations. The strings though aren't used kindly, fragile or fiddling but are - and were always - an essential element of the sprawling song cascades.