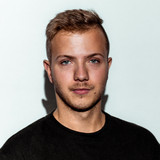 Robin was born and raised in the countryside of Northern Germany. At the age of 18, Robin released the first of his own songs: ‘One Day‘, which appeared on the compilation ‘about: Berlin vol: 8‘ by Universal Music. After 1 hour (!) it went to #27 in the German iTunes Electronic Charts and also into the German, Austrian and Swiss top 5. "I can still precisely remember that I checked iTunes to see how the song was doing. And then that.. "It really knocked me off my seat. Honestly, that was indescribable for me.” Meanwhile, Robin's songs are also featured in prime time TV shows. The singles ‘Cover It Up’, ‘Believe in me‘ and ‘Back to you‘ were released in April 2018 by the dutch label Strange Fruits. Just ‘Cover It Up’ was in Apple Music Easy Listening Charts in 66 countries, top 10 in 59 and #1 in 19 countries, such as Germany, France, UK, Sweden and South Africa. Lovefool feat. Joseph Feinstein is the brandnew single from Robin and a remake from The Cardigans. „I wanted to make it more danceable, to move the song from 90s Trashparties to the Club Dancefloor.“ It will be released on October 18th. It's like when you’re on the roller coaster, you arrive and want to drive directly again. Set on Repeat! Down the sunset, while on the way to the next stop: Santa Monica Beach, Pacific Park. Saskia Rienth in conversation with Robin Knaak, October 2019