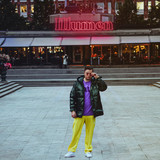 Anthemic! Illumen releases their brand new single, 'What's Going On'. As if it is made for a soundtrack on a blockbuster movie, Illumen have proven themselves absolute superior musicians and songwriters for this track.   Written about the multiple threats about the fake news surrounding Covid-19, 'What's Going On' uses lyricism that challenges the leaders and their competence guiding nations under this difficult time. Shining a light on the hardships the world has had to overcome, 'What's Going On' is a first class example of Illumen's talents and passion for their music.   Hailing from Stockholm, the three-piece are influenced by a plethora of different musicians, such as Tones & I, Imagine Dragons and Coldplay - but are more comparable to that of british singer/songwriter Tom Grennan and a more anthemic version of The Wombats.   The name, Illumen, comes from the idea that the band illuminates the darker sides of themselves, as well as the dark times the world is currently stuck in. Making music to help people strive to make a difference for the better, Illumen will capture the emotions of their listeners.   During summer 2021 Reasons reached No 1 on the Swedish local radio toplist - 'A simple and bang on pop song. Does not get much better than this'. In August 2021 'What’s going on' was playlisted by Ditto Music on 'The Indie Hitlist' on Spotify. Next single 'Drifting Apart' will be released on all major platforms October 29th.