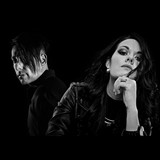 As Strange As Angels

Featuring As Strange As Angels

Featured on SiriusXM’s Octane & Octane Discovery channels, As Strange As Angels are on the heels of three Billboard Top 40 Active Rock singles (“The Curse”, “Mirror Mirror” & “Miracle”) & a Mediabase Hot 100 track “Never Broken”. Featured on Spotify Rock, Alternative Press “10 Songs you must hear” & Loudwire playlists. As Strange As Angels released their latest single “Love Song” on October 4th, 2021. “The Curse” landed on BILLBOARD as the #4 “Most Added” & #11 “Most Increased Plays” and entered the BILLBOARD Mainstream Rock TOP 40 @ #35 on 2/24/21. Produced by Chris Dawson & Jimmy Beattie (Saul, Any Given Sin), “The Curse” is the soundtrack for those fighting and clawing through life. Letting the anvil of negativity and the weight of carrying it go. Searching for peace while finding yourself and destroying your demons and putting them behind you.   Throughout his career Norman Matthew has shared the stage with rock luminaries Rob Zombie, Korn, Deftones, Five Finger Death Punch, The Pretty Reckless, and Gemini Syndrome. He has also appeared on the Vans Warped Tour.   Says Norman: “As Strange As Angels is a story with many chapters - each chapter needed to be given its own soundtrack. Whatever felt right, I ran with…. I didn’t care about genre and labels. I just needed a vessel to call my own as a mechanism to communicate what I was thinking and feeling. I owe much of myself to all those that kept my blood flowing and my heart going - and I owe all of myself to my son.”