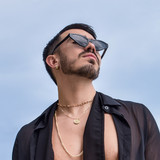 Christian Corsi is a Colombian Electronic Music Producer and Artist, based in Miami, United States. Along his exhilarating journey, also lived in Brazil, Argentina and New York. Corsi always felt connected with music and art in every form since he was a kid, but it was in 2019 that he had the opportunity to study Electronic Music Production in Miami, and finally started to produce Dance & House Music. Corsi’s first singles were ‘Make Me Feel’ and ‘Keep Calling’, entirely produced, written and sang by himself, in 2019. Since then, he started making more and more music, releasing new singles constantly. Corsi is a power house artist who does it all, being able to bring a playful energy and a sensual feeling in his music, with signature big lead drops and quirky retro synths. Each song is always meaningful and has a whole theme around it, perfectly matched with strong and creative visual content. Christian Corsi is a talented and proficient artist that loves to have control on his own creations, aspiring to create hits that people would never forget. Corsi has almost 1M streams convined and almost 31k monthly listeners from all over the world, being the top countries Mexico, Colombia, Chile and Peru. His latest release is the single ‘High By The Beach’, which came out on March 5, his first ever dance cover. Corsi has another new dance single coming up on August 27.