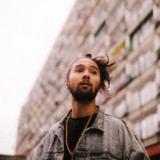 Tóke is one of the most promising newcomers Europe currently has to offer. Since the release of his self-produced debut EP „Troddin‘ With A Vision“ (2014), in which he created an exciting fusion of Reggae and Folk, the 27-year old artist has constantly been gaining momentum. His debut album „Wake Up Inna Kingston“ (2016), allowed the young artist to tour with his own band all over Europe, Jamaica and his country of birth, Indonesia. After subsequently being recognized three times (#2017, #2018, #2019) as „Germany’s Best Newcomer“ by Riddim Magazine, Europe’s biggest print media for Reggae & Dancehall Culture, he is now gracing the cover of the latest issue - an iconic achievement for the German-Indonesian. This milestone didn’t go unrecognized: International Reggae Star Gentleman invited Tóke on Uprising Festival’s (SLK) main stage to sing with him in front of 10,000 people. It was only a matter of time until the international scene would pick up on this young man’s rise: In 2018 Tóke collaborated with Walshy Fire (Major Lazer), who in his own respect worked with international stars like Justin Bieber, Sean Paul, Chronixx. Tóke is not bound to a genre and is currently working on the next step: His new EP will incorporate the influences he gathered as a travelling cosmopolitan - RnB, Hip Hop, Neo-Soul, Folk, while tastefully carrying on his spirit of Reggae.