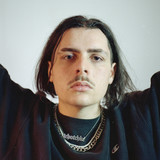 Hailing from the quiet northside suburbs of Perth, Australia. Hindley is rapidly growing a loving and attentive audience through his consistent stream of homegrown lofi raps, slinky R&B and heartstring ballads. From a young age, Hindley drew inspiration from an eclectic wave of hip hop and bedroom producers with the likes of Chance the Rapper, Joey Bada$$, James Blake, Nujabes, Corbin, Harris Cole and Milo of the Ruby Yacht. This influence has carried him into multiple successful bodies of work including Florence, his self made smash that has seen a collective 100k streams. Cutting his teeth in the Perth hip hop scene, Hindley found footing and recognition through his finely crafted lyricism and endearing stage presence. Eventually leading him to work and collaborate with a myriad of local heavyweights including his now close friends and rising favorites And Beyond. Moving to Melbourne to further pursue his musical passions in 2019, mere months before the global pandemic. Hindley continued his steady traction with multiple performances (including a launch for his single Gemini ), collaborations with local acts like Sunday and a rapidly growing online presence. Now in a new world, Hindley continues to be the self made artist who’s multilayered raps and soul sunken vocals have rightfully earned him the attention of the eager and engaged.