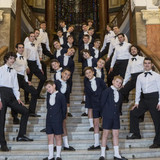 The Sofia Boys Choir is the first boys choir in Bulgaria, founded in 1968. The performers, aged 8–15, are selected from schools in Sofia. The founder and first conductor of the choir was Lilyana Todorova. Prof. Dr. Adriana Blagoeva has been conductor of the choir since 1989. In 1997 she founded the Youth Formation with the Sofia Boys Choir, consisting of former members of the boys choir. Today the choir is presented in three formations – boys, youth and mixed. The Sofia Boys Choir has very wide repertoire: Bulgarian choral music, Orthodox music, Bulgarian folk music, choral pieces of various musical genres from the 14th century to today and participations in musicals and operas. The choir has issued 10 solo audio CDs and has participated in another 9 with other musicians. Since 1993, the Sofia Boys Choir has won many awards at international choral competitions: one Grand prize, five First prizes, and five Second prizes. The choir has been awarded the Musician of the Year prize in 2002 by the Bulgarian National Radio, The Silver Lyre in 1998, The Golden Lyre in 2003 and The Crystal Lyre in 2009 and 2012 by the Bulgarian Musicians and Dancers Union, The Golden Plaque by the Bulgarian Choral Union, Golden Quill for contribution to Bulgarian culture. The Sofia Boys Choir has toured in Russia, Greece, Poland, Italy, Germany, France, Spain, Switzerland, Slovenia, Romania, Turkey, Slovakia, Hungary, Moldova, Bosnia and Herzegovina, Serbia, Belgium and Japan.