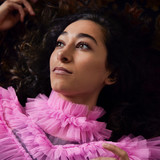 Meredi is a composer, producer and pianist based in Berlin. The 28-year-old’s introduction to music didn’t come via the allure of glittery stages or the hedonistic lifestyle of rockstars, but rather out of pure need to express herself. Meredi’s certainty towards composition, and an old piano which lingered at her home’s hallway, meant she had an early start, “I don’t really remember when I started to compose, it feels like the music was always in my head and I just learned how to bring it to live,” she reminisces, “The piano was always my island or retreat, I spent a lot of time by the piano with my melodies.” Meredi is set to release her second studio album ‘Trance’ on August 6th via Modern Recordings. “Trance is at once deeply personal and fiercely universal, a state within the self that can also be collectively attained and shared,” says the composer who got inspired by the immersive experience she would feel in her city’s famed – now faded – nightclubs. “I’m inspired by the intensity and power of the music in techno raves and I wanted to express it in my own words in this album.” With Trance, Meredi taps into that heightened state of being, often associated with ceremonial rituals or sweaty dance floors, from the intimacy of her home. Trance showcases the power of music in its purest most abstract form where, regardless of medium or genre, it manages to magically dissolve the personal and unify the collective.