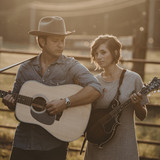 Featuring His &amp; Hers

His & Hers is a folk/bluegrass music duo from Mocksville, NC consisting of married couple, Caleb and Sara Davis. High School sweethearts meeting at age 14, Caleb and Sara first found their love for music in church and through singing together in the choir in school. Caleb played in several bands in college, but after marriage and two beautiful children, decided that the only person he wanted to play music with anymore was his sweetheart. His & Hers has been playing as a duo since 2015. With Caleb on guitar and Sara with occasional and timely mandolin chop, they perform original songs about family, relationships, and community, along with timeless traditionals and surprising covers that keep the crowd singing along. At their happiest, they are husband and wife, mother and father, and His & Hers.