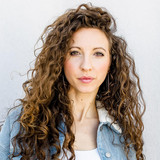 Megan Tibbits is a singer and songwriter of reflective, acoustic guitar-centered pop songs, and a lifelong musical journeywoman who found the spotlight on American television by reaching the Top 13 of the ABC singing competition Rising Star. Born and raised in Caro, Michigan, not only in a musical family but in a family gospel touring band, Tibbits traveled the country with the group for over ten years, recording harmony vocals by age six and learning piano, guitar, harp, saxophone, oboe, and songwriting along the way. She graduated from Cornerstone University in Grand Rapids, Michigan with a degree in music education, and soon relocated to Los Angeles to pursue her own music career. Her self-released debut EP, When Life Is So, arrived in 2011. In 2014 she appeared before a national TV audience on Rising Star, and she released her debut album, Until I Fly, in the summer of the following year. ~ Marcy Donelson, Rovi