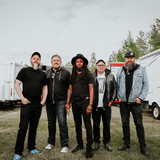 “Just put us in front of an audience, and we’ll make it work,” says Taylor. His eponymous band has been doing that for over a decade, from clubs both large and small in their native Toronto to festival stages across Canada. Three studio albums along the way, as well as a live set recorded at Lee’s Palace and another live album of Motown covers, have confidently captured that spirit. But a band this good has to be seen to be believed. It’s tempting to call their music R&B, except that means something very different today than it did in the days of Al Green, Bill Withers, and Van Morrison.

Julian Taylor Band (JTB) look and sound like a rock group, but they’re nothing at all like any of the rock bands out there. There is no macho posturing or distortion pedals to be found. Just pure soul.