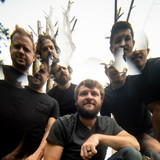 Passafire’s single, Keepin' On, serves as a mission statement for the veteran rock-reggae outfit as they continue to forge ahead through their second decade of reimagining the boundaries of the current rock-reggae landscape.   Since forming in 2003, Passafire has released a total of six studio albums and boasts credits like producing with Paul Leary (Sublime, Pepper, U2, Slightly Stoopid), #1 albums on both the Billboard and iTunes Reggae charts, and sharing stages with rock-reggae OGs 311, Pepper, Toots & the Maytals, The Wailers, and John Brown’s Body, who in the band’s early years, inspired them to explore reggae with a gritty edge.   “We like to mix tight, clean reggae grooves with distorted guitar riffs” insisted Ted, “We’re ‘90s kids,” added Will, “we love rock, hip-hop and metal equally. It was always natural for us to straddle the line between genres.”   Ted Bowne – Guitar/Lead Vox Mike DeGuzman – Keys/Guitar Nick Kubley – Drums Will Kubley – Bass/Vox