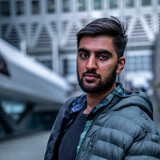 Punchy and abrasive, words to describe British rapper and vocalist Paras’ music are an understatement. Paras delivers piercing rhymes addressing both personal and social issues, often mocking the state of the human condition. In August 2020, Paras challenged himself to record, mix and master and market a new song for each of the four weeks. The first of the installments being the defiant, hater killing anthem 'Get Out' and the second track 'Dreamchaser (The Curse), Paras' describes how his mission to be a successful musician has plagued his mind.

Paras, a third-generation British Indian raised in London, began his intense love for hip hop aged 13, when he first listened to The Notorious BIG debut project ‘Ready to Die’ and the Wu-Tang Clan’s album ‘Enter the Wu-Tang (36 Chambers)’. Despite his love for the golden generation of hip hop, he has said his favourite artist is Drake, still to this day. He has cited Drake, Earl Sweatshirt, Freddie Gibbs, Run the Jewels, Billy Woods, Michael Jackson, and singer-songwriters; Father John Misty and Mitski as the main influences for his music.