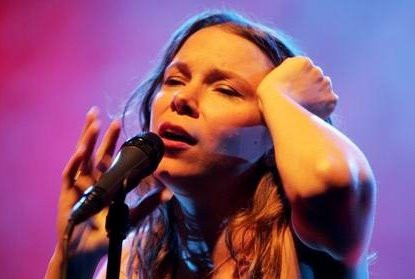 Maybe it was Lhasa's unconventional upbringing that has given her such a unique vision, or maybe it was always within her. Whatever the reason, she stands as one of the most idiosyncratic Mexican-American performers, fully aware of the tradition, but putting her own spin on it. Lhasa's mother, Alexandra Karam, was an actress and photographer, her father, Alejandro Sela, a Mexican professor teaching in upstate New York -- Lhasa de Sela was born in the tiny village of Big Indian. The big family (Lhasa has three sisters, three half-sisters, and three half-brothers) was fairly nomadic and their travels took them between the U.S. and Mexico, traveling and living in a converted school bus. It was an arty life of music, books, and letters, but without the insidious influence of television, banned by her parents. Instead, the family was cast on its own resources for entertainment and that included nightly singing, where Lhasa developed her voice. The family spent a total of eight years south of the border, where Lhasa grew into the local culture, before finally settling (outside the U.S. again) in Montreal, Canada, in 1992, at the age of 20. She'd visited the place the previous year and met Yves Desrosiers, a young musician with whom her initial work had proved so fruitful that they decided to collaborate on a full-time basis. The pair played locally, adding bassist Mario Légaré, and then toured nationally, garnering rave reviews from coast to coast, before beginning work on Lhasa's debut, La Llorana. A foray to the U.S. in 1997 to travel and perform with Lilith Fair won a number of fans, who were surprised by the strange, richly sensual music and Lhasa's smoky jazz phrasing. The venture was repeated in 1998 to coincide with the American release of her album, which had already been available for a year in Canada. After touring behind the album, Lhasa moved to France, to work with her sisters, who perform with circuses there. ~ Chris Nickson, Rovi