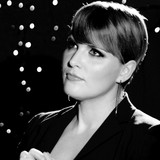 Sorcha cut her teeth on the live music scene in the late 90s while attending university in Brisbane, Australia. She moved to Melbourne and released her first EP "Kiss of the Spiderwoman" in 2003. A pianist, guitarist and singer, her style has a feminist folk rock edge that draws inspiration from 90s female powerhouses such as Tori Amos, PJ Harvey and Suzanne Vega. In 2004 she moved to Tokyo and befriended violinist Abertronix, who also hails from Adelaide. Together they recorded and produced

"Radiodaze" (2008), "Sorcha and the Sinners", "Chrysalis" (2012) and "Lost and Found" (2018). In 2016 she teamed up with engineer and producer Jakey Slater and released her most noteworthy work to date, "Hymns for Her." Sorcha performed two promotional concerts in Tokyo with a 9 piece ensemble, including the irrepressible Morgan Fisher from 70s UK glam-rock band Mott the Hoople. In August/September 2017 she played shows in London, Bristol, Amsterdam, Cottbus, Berlin and Copenhagen. In 2017 she teamed up with Slater again to record three more songs which would become the mystifying triptych: "Shells, Rocks and Bones" She is active on the Tokyo music scene as a voice actor, cabaret singer and piano lounge singer.