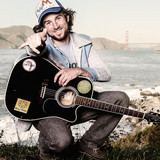 A musical renaissance man, Robin Applewood sees his career as giving back. His songs tell a tale of Love and the struggle of everyday living, tempered with an "everything's gonna be alright" attitude. Such a positive vibe is combined with a dynamic mixture of rock, reggae, funk and soul to offer an upbeat sound that appeals to a wide audience. Robin, also known by his previous stage name Dogman Joe, released his fourth full length album "Resonator" which was produced, arranged, mixed and performed by Robin himself and features many respected Bay Area talents. In addition to receiving three honorable mentions on VH1 Song of the Year, Robin was selected for the KFOG Local Scene CD and received extensive international radio play. An active member in the Bay Area music community, Robin founded Bay Vibes and co-founded ULUV, trusted hubs for local musicians and fans. Through these organizations Robin has co-produced over 400 live music events, including 6 large festivals and a multitude of benefit shows for charities and non-profits. Recently Robin's focus has been on working with artists of all genres in his recording studio and playing concerts for isolated individuals in jails, prisons and drug rehabilitation centers. When Robin’s not putting on events, touring and recording, you may happen across him in a local joint sharing tales and music or catching the perfect wave in his beloved home town of San Francisco.