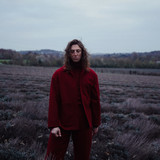 Drawing on the work of pioneers like Leonard Cohen and Adrianne Lenker, Wilding endeavours to follow in the footsteps of those mighty mavericks through his demanding and wholly original approach to songwriting. The new EP follows on from Wilding's 2020 debut release 'To', as rapturously received by CLASH, Atwood and Beats Per Minute. As a coherent narrative that unfolds over four songs, 'Book of Fate' is an emotional musical journey through the process of forgiveness. There is much beauty and vulnerability to be found in Wilding's writing; in his poetic lyrics, the grandiose arrangements and especially through his quavering vocals reminiscent of Sufjan Stevens during 'Seven Swans' and Justin Vernon's work on 'Bon Iver'. Both 'To' and 'Book of Fate' have been recorded with David Granshaw (Fionn Regan) at Chale Abbey Studios. These recordings display all the coherence and creative force of an artist who is constantly refining his craft. There are vibraphones and drum machines, grand piano and doubled acoustic guitars - but it is the songs that continue to set Wilding apart. 'Book Of Fate' is his strongest set yet. All throughout, Wilding’s gentle falsetto breaks the gloom like a shooting star in the night's sky, gliding through the inky darkness.