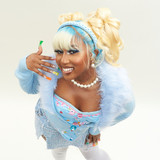 Fueled by self-love and manifested dreams, Baby Tate is forever evolving. The Atlanta-based artist, formerly known as Yung Baby Tate, has a new, concise moniker, but the 25-year-old’s sound remains sprawling. Within a single body of work, you’ll hear summery pop, amorous R&B, and hard-hitting hip-hop. Baby Tate’s debut project, 2015’s ROYGBIV, saw her exercising full creative control, as a singer, songwriter, rapper, producer, and engineer—independent skills she’s been honing since she was 13 years old. By 2018, Baby Tate had locked into executing concept albums, releasing the thematic BOYS EP, followed by her breakthrough project, GIRLS, in 2019. With both collections, Baby Tate expanded her musicality and songwriting processes, connecting strongly to women and femme audiences through kaleidoscopic beats and highly relatable lyrics. At the center of Baby Tate’s endeavors is an intentional interweaving of female empowerment and joy, as evidenced by her cohesive, yet varied 2020 EP After the Rain, the home of her viral, confidence-boosting hit “I Am.” A genuine heroine for any person who’s ever faced intrapersonal challenges, the multi-hyphenate artist offers both gentle and assertive reminders that all we need is faith, fortitude, and fearlessness. With each release, Baby Tate provides her fans with potent anthems and inspiring bars, unveiling new facets of her technicolor character in the process.